The Top 10 Best Memes Ever

Wasting time in front of the computer or on your smartphone has become the nation’s favorite pastime. Internet memes has helped this immensely by providing user generated humor in abundance. But what is a “Meme”? And which have been the most popular and influential memes since there beginning in 2001? We will try to provide some answers.

What is an Internet Meme?

The “Top 10 Best Memes” list on this page is, ofcourse, arbitrary. There is no way anyone can agree on the “10 Best Ever Memes”, especially if you asked the opinionated masses of the internet. The list below is simply a minimized list of some of the most popular memes; memes that have managed to transcend the obscure meme-blogs into popular mainstream media and everyday life. Feel free to add to the list or voice your opinion in the comment section.

An “Internet meme” is defined on Wikipedia as an activity, concept, catchphrase or piece of media which spreads, often as mimicry, from person to person via the Internet. It his not limited to a single image with wording on it, though this kind of image meme is fantastically popular.

When the meme era started on the Internet during the early 2000s, it was a creative way for companies and businesses to engage and create business opportunities. As you probably already know, memes spread like wildfire over social media networks. While these memes spread, the meme itself can be linked to a website. An interesting audit came up with the estimation that almost 25% of any content on these social media networks links to some other website, be it relevant or not to the content itself (estimations made by AOL & Nielsen).

How Memes Work and Where to Spread them.

The young and constantly growing audience on the internet find memes a great way to get engaged, simply because what young human isn’t looking for a way to get some laughs in? When you consider,  that those aged 18 – 34 years of age make up 30% of all users on the internet and how 36% of these users share content, you should be sharing content geared towards that crowd. Social media traffic works better when you share content that is engaging, not so much self promotion or product pushing. Doing things like linking to cool and interesting content with your facebook photo share or placing a link in your tweet, you can make your post more engaging or “worthy of sharing”. Memes offer a great way to share many types of different and interesting content.

If you have an idea for a meme, some good places to start spreading them are:

Ok, lets get on with it. Here are those handpicked memes, that we talked about.

Cats have been an internet fascination since the beginning of time (or the internet…). LOLcats features a variety of cat pictures captioned with funny phrases, specifically in it’s signature white text. Bad spelling and grammar are bonus points for this meme as it only adds to the humor. The bog I Can Has Cheezburger brought the LOLcat meme up to an intense level of popularity. In 2007 was the blog’s peak and reached over 1 1/2 million users daily. No wonder LOLcats spread so much! 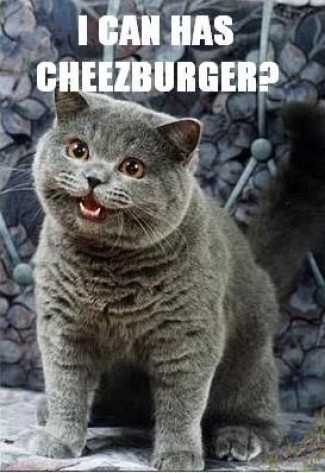 A lot of people associate “Internet Memes” with popular, reused images with white text, such as those you can generate yourself on MemeGenerator.net. S0, of course we have included an example of the most popular of those type of memes: The “Y U No” meme has had more than 2 million images created and shared on MemeGenerator, far out ranking other “White Text” memes. “Y U No” is an incorrect way of writing, “Why don’t you?”.  The image features a frustrated, angry stick-figure character on a blue background with a text that express frustration or bewilderment about a chosen subject. The character’s facial expression, full of frustration and rage, can be traced back to the cartoon book Gantz’ Chapter 55: Naked King. See the 10 Ten “White Text” memes from MemeGenerator.net at the bottom of the page.

Let’s be honest, Chuck Norris is a legend. If you’re not familiar, Chuck Norris is a martial artist and actor. His most popular roles were in the movies Walker, Texas Ranger and The Way of the Dragon. Norris was always the fighter in these movies hence why he is depicted the way he is in Chuck Norris memes. The deal with the Chuck Norris meme is anything to do with how manly he is and how he can do anything he wants because of it. Many of these memes also feature Chuck holding guns to show even more manliness. This is pretty much a timeless joke.

Rick Roll is one of the most annoyingly funny things to happen on the internet. A popular radio song in the 80s and 90s, Never Gonna Give You Up by Rick Astley made a comeback in the late 2000s. This happened because of a joke where people would trick others into clicking links that went to the video instead of where they implied. Those who were tricked would be told they were going somewhere that might be useful for them or something entertaining. Of course as you already know, they were redirected to Rick singing Never Gonna Give You Up. This is ultimately ended up called being “Rickrolled”.

You know.. He is NEVER gonna give you up!

Who would have thought that so many people would want to dump buckets of ice water over themselves? It seems like EVERYON was doing the challenge as it was flooding the web on Facebook, Twitter, Instagram, Vine, Youtube…literally everywhere it could go. Videos were posted, shared and money was donated to the ALK Association to raise awareness for ALS/Lou Gehrig’s disease research. Even huge famous celebs and highly renowned politicians decided to join in on the fun of this fundraiser. In the end, the ALS Association raised $220 million all around the world! I wonder if anything can top the ALS ice bucket challenge after that.

Is it blue? Is it white and gold? Can it ride a bike? The dress the caused so much unnecessary controversy over what color it was has made it onto this list. Originating from tumblr, a popular blog and sharing site, the post was only this picture and a question; “What color is this dress?” The dress made it’s way to the front of popular news sources like Yahoo and of course Facebook was all over this disaster. It all came down to the theory of how light can affect the way people preceive colors. Oh, and if you really wanted to know what color the dress was, it was blue and black.

Friday is a song created by Rebecca Black. The song went viral because it was just so bad that it hurt. Everyone was making jokes of her inability to sing, the cheesyness of the song, and how this had to be a joke itself. It is a moment to be remembered forever in internet history as one of the cringiest moments. This all happened for all the wrong reasons it seems. Regardless, thank you Rebecca Black for this hilarious meme!

So bad, its good.

The most famous grumpy cat on the internet goes by the name of “Tardar Sauce” believe it or not. Photos of the distinct frowning cat faces were loved by Reddit, creating the Grumpy Cat meme with the funniest captions that emulate just how grumpy this cat is. These captions were often over exaggerated the negativity and annoyance of Grumpy Cat to add furthermore grumpy asthetic. A huge hit in merchandise and even being featured in a film, Grumpy Cat is living the good life. 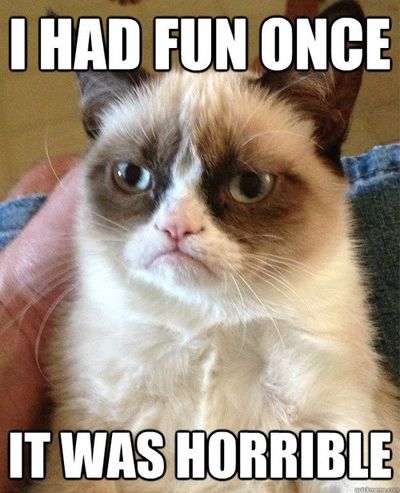 Love it or not, this is one of the catchiest songs of all time and we can’t even understand the dang song! That is, except for “Hey, sexy lady!” Nobody expected this to get as big as it did. The music video for Gangnam Style featured Psy, the creator of this masterpiece, doing the Gangnam Style dance along with a ton of pretty ladies. One of the most popular songs and videos of all time, it’s practically the most viewed with almost 2.5 BILLION views! If you haven’t taken the time to really listen to this song and do the Gangnam Style dance, then I really suggest you fully immerse yourself in this quality meme. 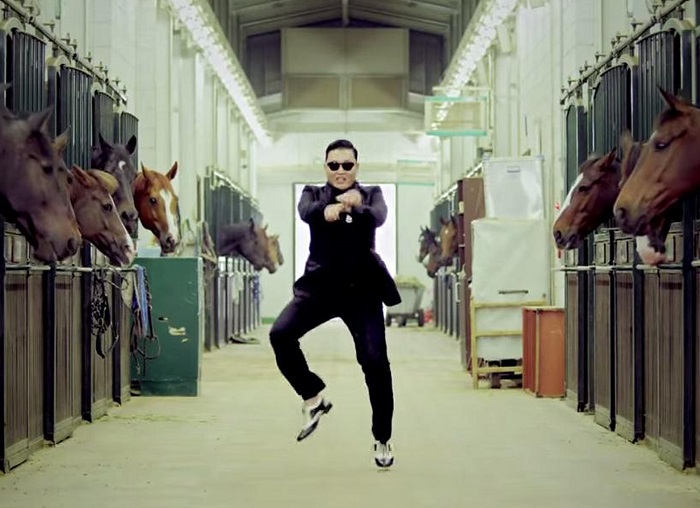 Dodge is a hilarious, stressed looking dog. Featuring the horrible misspelling of the word “dog”, Doge is consistently used to express simple phrases and a very low level of intelligence. He was so popular on image boards and forums that they even turned him into a currency. The currency is called Doge Coin, it’s amazin g just how far this meme has come. Doge is so funny and nobody can get enough of this fluffy dog’s stupidity. 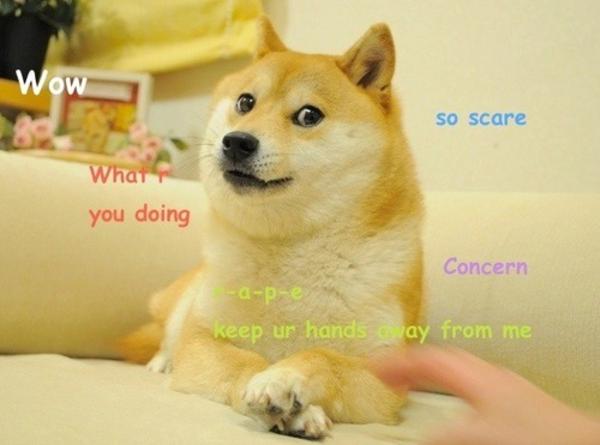 The phrase “double rainbow” was created when a hilarious man finds what looks to be a double rainbow in his backyard. The video went viral, mostly because everyone loved the way he said “double rainbow”. In the video the man acts completely shocked by it, and it’s super hilarious. This video was even featured on Jimmy Kimmel! Everyone of all ages can enjoy this light-hearted meme. 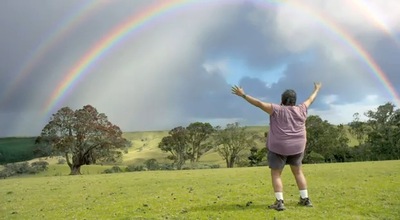 The Top Most Popular Memes on MemeGenerator.net.

A lot of people associate “Internet Memes” only with the popular, reusable images with white text, that you can  generate on MemeGenerator.net or www.imgflip.com/memegenerator.

Here is a list of the most popular memes ever, generated on MemeGenerator.net. 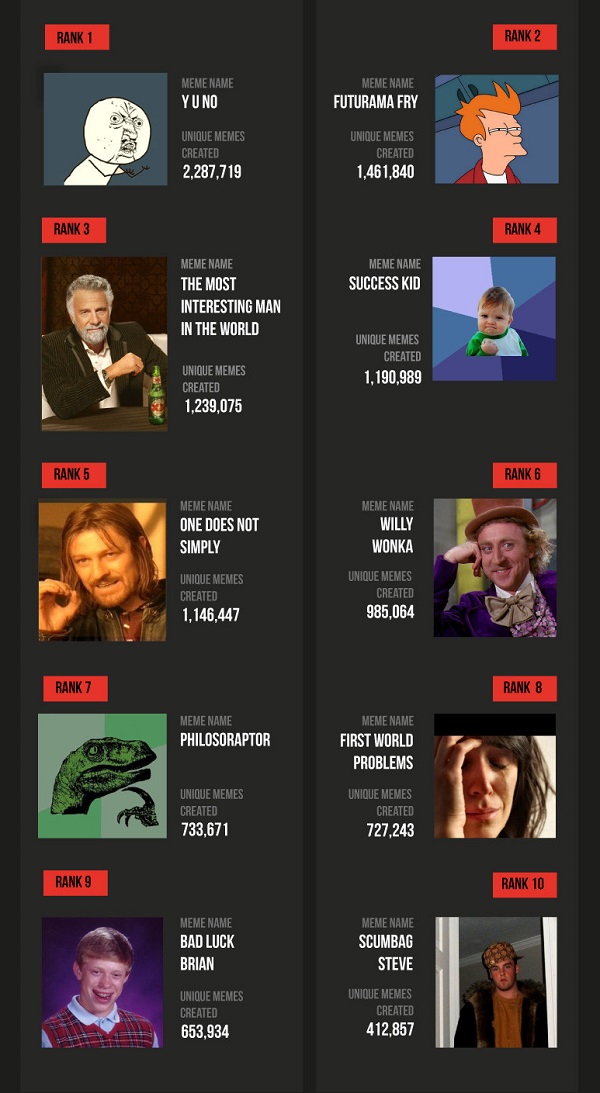 Credit to FunnyStatus for creating the above image. Visit them for more background info on the memes.

There you have it, the top 10 best memes ever, well, so far at least. If you’re a meme expert, then you knew all of these already. However, if you didn’t know, now you do, and it might make you want to explore more internet memes. Share these with your family and friends. Memes were made to make the world a funnier place, even if they do come off as a little bit stupid. That is what, they were meant to be!

Topsocialmedia.net is not affiliated with any of the websites or businesses, that are mentioned on this website. This web site is an informational tool only, providing lists and information about the best online resources for social media websites, seo, video/photo sites and other popular niche websites. All trademarks, trade names, product names and logos appearing on this website are the property of their respective owners.
Proudly powered by WordPress | Theme: Futurio